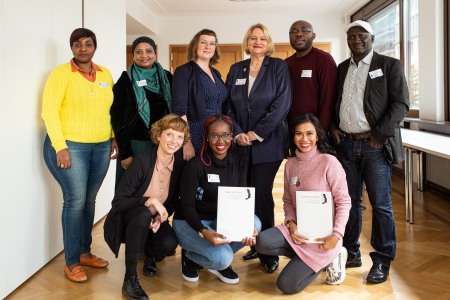 On the eve of the International Day of the Girl Child, TERRE DES FEMMES invited journalists and media to talk about the increasing prevalence of female genital mutilation (FGM) in Europe and Germany. FGM is a global phenomenon that constitutes a severe violation of the human rights of girls and women worldwide. Those affected oftentimes suffer long-term physical and psychological damages.

TERRE DES FEMMES urgently calls for action: awareness and sensitization on female genital mutilation, through projects such as Let’s CHANGE, is more important than ever!

At the beginning of the conference TDF Executive Director Christa Stolle addressed the attending press. She emphasized the seriousness of the situation and pointed out the organizations longstanding efforts to end FGM. For example, the statistic, which was later presented by Charlotte Weil, Policy Specialist on FGM at TERRE DES FEMMES, estimating the number of unreported cases of FGM in Europe and Germany has been publicized annually since 1998.

And the conclusion remains: The number of girls and women affected by female genital mutilation in Germany is on the rise. According to Charlotte Weil this is mostly due to migration from countries in which FGM is commonly practiced, e.g. Somalia, Eritrea, Iraq and Nigeria. 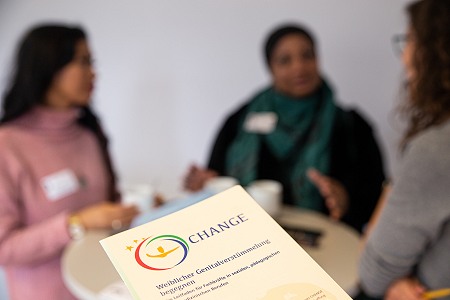 In 2019 approximately 70.000 affected women in Germany are estimated. This constitutes an 8 percent increase compared to the previous year. The number of girls at risk of being mutilated is believed to have risen 14 percent to about 17.600 cases.

This increase in prevalence demands for action.

Projects like Let’s CHANGE, that aim to prevent FGM and to achieve a better care for those already affected are of the utmost importance.

Let’s CHANGE is a cooperation of TERRE DES FEMMES, PLAN International, the Dutch organization FSAN and the French NGO Equipop focusing on community-based action. The project is co-funded by the European Union. 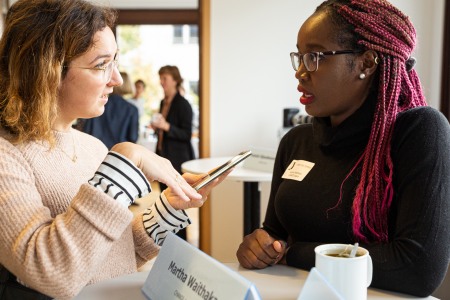 Throughout the course of this project TERRE DES FEMMES qualifies members of diaspora communities in Berlin to become so-called CHANGE Agents and Trainers. While the former mainly raise awareness in their own communities, CHANGE Trainers, who are selected from a pool of more experienced CHANGE Agents focus on the further education of professionals directly confronted with those affected by or at risk of FGM. The increasing demand for such trainings shows yet again how very important anti-FGM work is becoming, even in Germany.

After the introduction of the current numbers was concluded, journalists were given the opportunity to meet six CHANGE Agents and Trainers who kindly agreed to share some of their experiences.

TERRE DES FEMMES would like to thank the CHANGE Agents and Trainers for their continuing support and dedication to the cause as well as all other participants of this press conference.