On February 15, TERRE DES FEMMES held their second training session for the CHANGE Mediators of the project “Men Standing Up for Gender Equality”. Guest speaker Christoph May, expert and researcher on masculinity, was invited to host the workshop about “critical masculinity”

After a short introductory round, Christoph gave a brief overlook over the topics that he works on, including male stereotypes, gender roles und gender concepts, critical and toxic masculinity.  The participants shared personal experiences from their lives which led to exciting discussions.

Afterwards, Christoph and the other participants discussed ways of how men could act “pro-feminist”. They talked about male dominance in media, in sports, about the gender care gap and gender pay gap, about men’s unions and phenomena such as mansplaining and manspreading, about showing emotions and much more. The workshop provided a safe space to question the own attitudes and reflect on them. 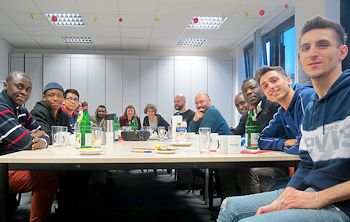 After a joint lunch, Christoph continued with an introduction on male phantasies in movies. This served as a starting point to, then, discuss representations of masculinity and their impacts on society.

At the end of the day, all CHANGE Mediators jointly emphasised that they learned a lot from this workshop and that the talks left a mark on them. The workshop serves as the foundation for future training sessions in which the topic of gender-based violence will be the focus of our work.

We again cordially thank Christoph for the great workshop and his input and are looking forward to cooperating with the CHANGE Mediators!