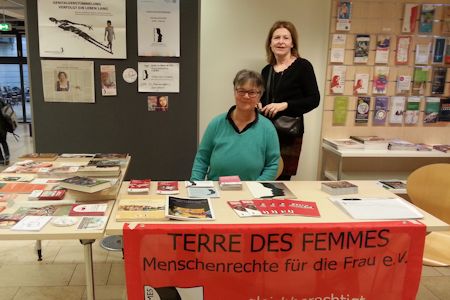 Searching for the right reading? Want to share knowledge? This year again, TERRE DES FEMMES (TDF) arranged a Germany-wide book table action about female genital mutilation (FGM) on the 6th of February to mark the International Day of Zero Tolerance of FGM. Various book shops and libraries all over the country raised awareness about the issue by preparing a table full of recommendable literature on FGM and sharing knowledge about the practice.

By calling all volunteers and interested people in Germany to participate in the activity, the department of female genital mutilation of TDF pointed towards the International Day of Zero Tolerance. Activists, interested people, book stores and libraries had the chance to visit the TDF homepage for information about the action. Articles about previous activities served as an orientation on how to organise own events. Furthermore, a special and free-of-charge preparation package containing various information material on FGM for distribution was provided. Thus, participants of the event could pass on fundamental knowledge about the practice and the work of TDF in this field. On the one side, this served as a way to approach the topic from a literary point of view and get to know exciting literature about FGM, from autobiographies to academic dissertations. On the other side, the activity provided the opportunity to gain factual access to the consequences of FGM, the legal dimension in Germany and Europe and the prevention work of TERRE DES FEMMES and other organisations. 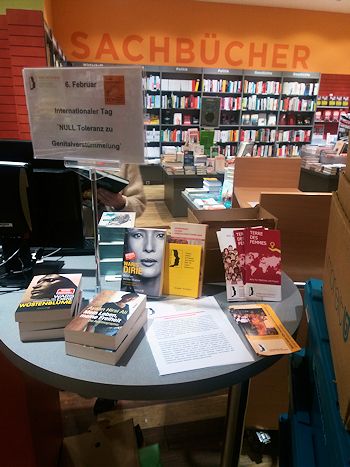 The volunteer group of the city of Konstanz successfully participated for more than 3 years in the event: Back in 2018, TDF member and volunteer Erika Korn already organised book tables in Konstanz. Back then, she even managed to organise a film screening of the award-winning film “Moolaadé” as a support event, which was held in cooperation with the city office for migration and integration. In 2019, again, she organised a book table action with other committed women in Konstanz and was confident that she would be part of the event in 2020, as well. This year, Erika Korn was supported by her good friend and photographer Monika Norrmann, with whom she organised the book table in the “Osiander” book store.

In the northern regions of Germany, too, people were actively involved in preparing such a book table action on the occasion of the International Day of Zero Tolerance. The city library of Bremen provided their large entrance hall to showcase the event. This way, the members and volunteers Angelika Brückner and Marianne von Heusinger reached lots of visitors of the library and were able to raise awareness on the issue.

Altogether, this year’s “International Day of Zero Tolerance of Female Genital Mutilation” was present at many different parts of the countries and took on different formats. The work of TERRE DES FEMMES and other organisations on FGM could be presented which illustrates a crucial feature of the fight against female genital mutilation, that is the exchange of knowledge!

We tank all the volunteers and interested people for their engagement in the book table action.