Two years Let's CHANGE: How can we end female genital mutilation (FGM) in the European Union and beyond?

On Tuesday, September 15, 2020, the final conference of the two-year project Let’s CHANGE (co-financed by the European Union) took place. Due to the Covid-19 pandemic, the conference was organized online and only implemented live on site in Paris for a small group of people.

The conference was entitled “How to overcome challenges in ending Female Genital Mutilation (FGM) in the European Union (and beyond)?” and was simultaneously interpreted in English and French.

For more than two years, the project partners TERRE DES FEMMES (TDF; Berlin, Germany), Équilibres & Populations (Equipop; Paris, France), Federatie van Somalische Associaties Nederland (FSAN; Amsterdam, Netherlands) and Plan International Deutschland (Plan; Hamburg, Germany) have been working together with the European network End FGM (Brussels, Belgium) to prevent and abandon female genital mutilation in the European Union and beyond. The work is based on the Theory of CHANGE, which has been jointly developed by the project partners. The main characteristic of this approach is the direct participation of multipliers from affected communities, so-called CHANGE Agents and CHANGE Trainers.

The conference marked the end of the project and provided the opportunity to review the joint work of the past two years. After the opening speech by Hélène Bidard, Deputy Mayor of Paris (responsible for gender equality and youth) and Aurélie Gal-Régniez, Managing Director of Equipop, Christa Jakobsson, Policy Officer in the Gender Equality Unit at the European Commission, presented the EU strategy to combat violence against women and girls. Following the project coordinators Charlotte Weil and Carolin Pranz (TDF) provided an overview of the Let's CHANGE project, the Theory of CHANGE and project results.

The keynote speeches were followed by a panel discussion with the CHANGE Agents and Trainers themselves. Various aspects of their work to abandon FGM were presented in concise contributions. It became clear how important it is not only to see FGM as an African problem, but one that must be understood and tackled globally. In addition, the involvement of men and religious leaders in awareness-raising and sensitization work is elementary. The training and sensitization of professionals such as doctors, social workers and midwives is also essential to support those affected and protect girls at risk. 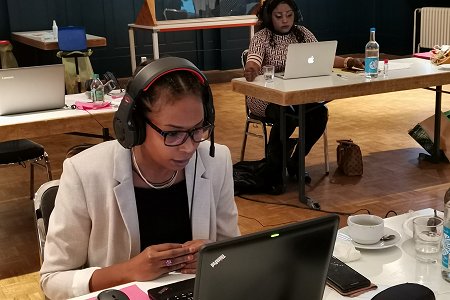 CHANGE Agent Samreen Suliman participates as speaker in the panel discussion. Photo: © TERRE DES FEMMESIn three parallel workshops, there was the opportunity for discussions together with the participants of the conference. The workshop topics were:

In addition to the inputs from the CHANGE Agents and Trainers, the conference participants had the opportunity to ask questions, to exchange experiences and discuss issues together.

During an online evaluation of the conference, many conference participants expressed their views on the groundbreaking work of the Let's CHANGE project and the importance of transnational cooperation, since FGM is a global issue. The direct involvement of affected communities is considered as best practice and shall be implemented in future projects as well.

Sokhna Fall Ba, project coordinator at Equipop and conference host in Paris, concluded the conference with an outlook in which she summarized and emphasized the elementary pillars in the prevention and abandonment of female genital mutilation:

TERRE DES FEMMES will also continue its work closely together with the communities to end female genital mutilation.