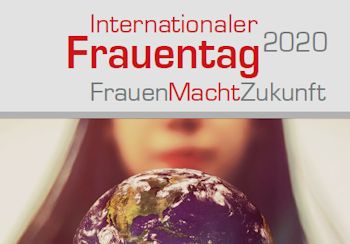 Cover of the brochure. © Stadt DortmundLike every year, in 2020 too, active women and women’s organisations from the region had the chance to register at the office for gender equality in Dortmund in order to announce a self-designed event. TDF member and volunteer worker on female genital mutilation (FGM), Silvia Kaufmann, participated in the action. She was supported by FGM expert and community member Oumou Diallo.

“WomenPowerFuture” – that was this year’s motto of the International Women’s Day. Different fora provided the opportunity to discuss current gender themes, strengthen the own competences or gain ideas for job and lifestyle. Interested people could register their own forum at the Dortmund city hall and the office for gender equality, then, took care of organising a suitable location and designing a supporting programme. Under the title “How to identify and prevent traditional practices against girls and women”, the workshop rose awareness on the consequences of female genital mutilation and early and forced marriage.

The workshop – which was the 11th out of 13 workshops in the forum – was conducted like an interview between Mrs. Diallo and Mrs. Kaufmann and served to inform the audience about the various aspects of FGM. They talked about the situation in Guinea, the home country of Mrs. Diallo, and Germany. In addition, they discussed terminological issues, motifs, health consequences, the legal situation and ways of prevention- such as Hamburg’s official “Statement opposing FGM” and mandatory preventive medical check-ups for infants and children. They also discussed experiences members of the audience had with the practice. Moreover, participants were given the chance to ask questions to both speakers.

In the second part of the event, Silvia Kaufmann talked about forced marriage. She started with an introduction on the concept of honour and continued with definition of various other expressions. Motifs behind the practice, the legal situation and its consequences were also presented as well as the prevalence and ways to prevent and recognise cases of risk.

After that, the head of the psychological centre for refugees, Rodica Anuti-Risse, had the opportunity to present their counselling offers and the facility, in general. She provided flyers about FGM and the association Crocodile e.V. Both facilities are also members of the Dortmund roundtable on FGM. Altogether, the presence of various organisations and facilities tremendously contributed to the entire event.

In the end, TDF member and moderator of the workshop, Ingrid Reinhardt, gave thanks to the participants for the great response and asked for feedback. Women and men equally demonstrated that they liked the concept of the workshop.