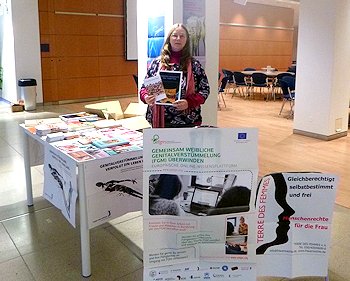 TDF member Hedwig von Knorre at her information booth in Leipzig. Photo: © Hedwig von Knorre 2020 Last weekend, the annual midwifery forum in the city of Leipzig took place. Professionals from the public health sector and the field of obstetrics came together in the Congresscenter Leipzig from 6th to 7th March 2020 to exchange knowledge on topics like pregnancy, childbirth and women’s health.

As always, our TDF member and former midwife, Hedwig von Knorre, represented TERRE DES FEMMES at the event and informed visitors about female genital mutilation (FGM). For two days, she distributed flyers and information brochures that explain FGM and the work of TERRE DES FEMMES on this issue and made people aware of training offers for key professionals. During one of her encounters, she was able to talk to a midwife from Baden-Württemberg who already convinced several doctors to sign up for training by Dr. Dan mon O’Dey, who is an expert on genital reconstruction surgery. She runs a birthing centre in the town of Rastatt and has regular contact to affected communities due to her work. This experience has made her aware of the topic FGM which is also why she is now raising awareness among other professionals.

Moreover, Hedwig had the chance to talk to a midwife who worked and lived in England for several years. According to her, the United Kingdom was more advanced in terms of health regulations for prevention and intervention of female genital mutilation and that the country has a more open-minded approach to the issue. In the UK, it is already part of the first consultation of a pregnant woman to talk about FGM. In Germany, however, FGM is often overlooked which is why many colleagues usually don’t know how to deal with the situation. “That’s bad”, Hedwig says and continues “we are stakeholders in this field and could do something about it.” What people need is a guideline which explains the necessary steps for medical personnel in cases of FGM.

We thank Hedwig von Knorre for her strong commitment and her lasting efforts in awareness-raising!