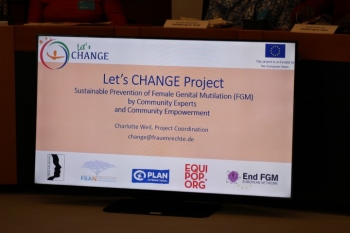 All project partners travelled to Brussels from their home countries and were each accompanied by a team of two CHANGE Agents or CHANGE Trainers in order to ask politicians for effective measures to end female genital mutilation (FGM). The advocacy meeting was held by Dr. Pierette Herzberger-Fofana MEP (Greens/EFA), Frances Fitzgerald MEP (EPP), Hilde Vautmans MEP (Renew Europe) and Marisa Matias (GUE/NGL).

After a brief introduction to the project by project coordinator Charlotte Weil (TDF), the hosts of the meeting took over. They took their responsibility very seriously and promised to put the issue at the top of the political agenda. They also gave thanks to the community activists for their commitment and emphasised their key role in abandoning the practice.

The first panel discussion was held under the title „Demystifying FGM – FGM Is a European Issue“. CHANGE Agents/Trainers Habiba Al-Hinai (TDF), Russom Mebrahtu (Plan), Sekou Kaba (TDF) and Marly Bah (Equipop) talked about their experiences from their community work against FGM and demanded that FGM must be seen as a global problem. This also includes appropriate transcontinental funding in order to have a long-term financial basis to overcome FGM since a millennium-old tradition cannot be abolished within a two-year-project period. Moreover, hearing personnel and interpreters in asylum processes need to be trained on female genital mutilation as a reason of gender-based persecution. Sekou Kaba highlighted the power of words and called on politicians to choose culturally sensitive expressions when it comes to FGM in order to not stigmatise affected people and leave no space for racism and xenophobia.

The second panel was themed „Ensuring Spaces for Community Voices – Breaking the Barriers”. Speakers were the CHANGE Agents/Trainers Aminata Dango (Equipop), Khalid Ali (FSAN), Aalia Hashemi (Plan) and Youssif Ouro-Akondo (FSAN). All four of them emphasised that FGM can only be abandoned if affected communities are integrated in the sensitisation work. Prevention measures and awareness-raising can only have impact if change comes from within the communities. Consequently, they called upon politicians to acknowledge their role in abandoning the practice and remunerate their work as cultural mediators. Activists are often confronted with resistance and rejection from their own communities. In addition, they invest time and energy in the sometimes-challenging sensitisation work. This deserves official recognition.

Furthermore, Aalia Hashemi explained the key role played by professionals who come in contact with affected women and girls at risk, for instance, teachers, social workers, doctors and midwives. They have to be educated about FGM, so that affected people receive the support they need and girls at risk of FGM are effectively protected.

Great Interest for the Work of the Communities

Apart from the hosts of the meeting, several other members of the European Parliament and multiple representatives from the European Commission were present. The interest for the work and experiences of CHANGE Agents and CHANGE Trainers was huge. After the discussion, participants had lots of questions for the activists.

Everyone agreed that female genital mutilation can only be overcome in cooperation with communities.

We hope that the politicians take on their responsibility and fulfil the political demands to end FGM.