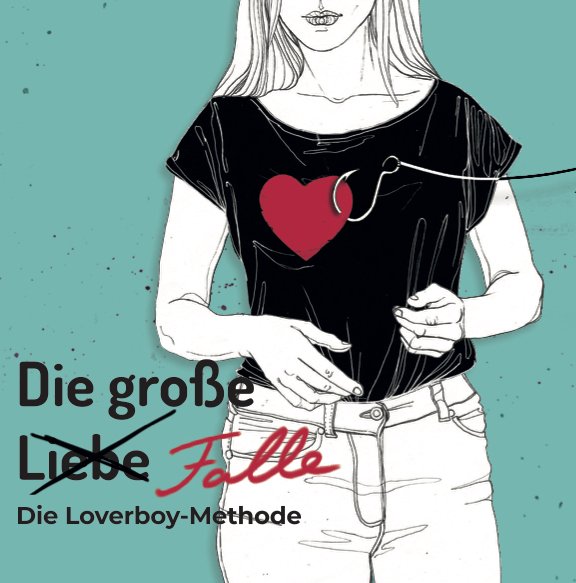 No one knows how many girls are affected by human trafficking. But every victim is one too many.

The loverboy method of trafficking in girls

Girls and young women are often forced into prostitution through the loverboy method. They become victims of trafficking in girls. The so-called “loverboys” are men between the age of 18 – 30. They seduce the girl or young women and then starts a pretend. He isolates her from family and friends and makes her depend on him. Then he asks the girl to prove her love for him by helping him with money – money that she is meant to earn in prostitution. Violence, threats and drugs often play a significant role. The aim of the pretend relationship is to sexually exploit her in order for the loverboy to benefit financially.

This sexual exploitation of girls and women has profound emotional and physical consequences for the victims. TERRE DES FEMMES considers prevention to be the best form of protection. This is why we developed a new flyer to raise awareness especially among the target group of girls between the age of 12 to 18 years old.

What is trafficking in women?

“Trafficking in persons shall mean the recruitment, transportation, transfer, harbouring or receipt of persons, by means of the threat or use of force or other forms of coercion, of abduction, of fraud, of deception, of the abuse of power or of a position of vulnerability or of the giving or receiving of payments or benefits to achieve the consent of a person having control over another person, for the purpose of exploitation.” (Palermo-Protocol)

Similar definitions can be found in the relevant EU Directive on human trafficking (36/2011/EU, pdf-file) Germany finally implemented this EU directive in October 2016. The statutory offences in §232, §232a, §233 and §233a of the German Criminal Code now broadly mirror the international definition of human trafficking. Persons recruiting, transporting, receiving others for the means of exploiting them and by taking advantage of their economic predicament or their helplessness (for example, based on their unfamiliarity with the country in question) are subject to prosecution. To fulfil the criteria for this statutory offense, no proof for helplessness is required if the victims are under 21 years old. The actual exploitation is punished according to §232  in case of forced prostitution and §233 in case of labour exploitation.

The German Federal Criminal Police reports that most victims of human trafficking are from Eastern Europe, mainly Romania (22%) or Bulgaria (23%). Economic pressures and lack of jobs mean that these women hope to get good jobs in restaurants or as cleaning personnel – jobs that turn out to not exist. They are often forced into prostitution. In other cases, the women know that the “job” involves prostitution but could never imagine the realities of prostitution in Germany.

Human trafficking is often viewed through the lens of migration. But of the known victims of sexual exploitation, almost a fifth are German citizens (19% according to the German Federal Criminal Police). Amongst minors affected by human trafficking and other forms of commercial sexual exploitation, almost half of the minors possessed the German citizenship. The so-called “loverboy” method of trafficking in girls is often used to manipulate girls and young women into prostitution.

According to the German Federal Criminal Police, three quarters of the suspected perpetrators of human trafficking were male and one quarter was female. Germans represent the largest group of suspects (25%), followed by Bulgarians (22%) and Romanians (18%).

Nigerian girls and women are increasingly identified as victims of human trafficking in Germany. They were promised jobs in Europe and are later physically forced or threatened with voodoo to keep them in their exploitative situation. They have the right to asylum since human trafficking counts as a form of gender-based persecution in Germany.

Prostitution is one of the oldest forms of sexual exploitation of women in patriarchal societies. Prostitution reinforces gender hierarchies and implies the permanent sexual availability of women. Prostitution is systemic violence against women and violates human dignity.

There is no valid data or good estimates of the number of prostitutes in Germany. This is a problematic gap in our knowledge. Even though some estimates dating back to the 1980s are cited again and again, there is an agreement, that these estimates have no empirical basis. A general consensus seems to exist both from police and practitioners in counselling centres in Germany, that the large majority of prostitutes in Germany are migrant women, primarily from Eastern Europe. TERRE DES FEMMES calls on the federal government to fill this information gap by conducting research and qualitative studies on the situation in prostitution in Germany.

The reasons that lead women into prostitution are diverse and often multi-layered. Economic needs and the lack of alternative income sources are frequently the main reason. Additional factors are: a low level of school education, a lack of work permit or undocumented status, debt, drug or alcohol (ab)use, or emotional dependence on men/pimps. These women are often trapped in the exploitative circumstances. This reduces their ability to deny unprotected sexual intercourse.   Consequently, numerous prostitutes enter into a vicious circle, which is hard to escape. Only very few prostitutes engage in prostitution of their free will with real alternatives of making a living.

Prostitutes experience violence at significantly higher rates than the average German woman. According to the Federal Ministry for Family Affairs, Senior Citizens, Women and Youth (BMFSFJ) women in prostitution don’t only experience more violence in the private and working context, but also more threatening forms of violence, as measured by their injuries. 68% of the interviewees in a study conducted by the Federal Ministry in 2004 (pdf-file)reported that they had experienced life-threatening danger. More than half of the prostitutes had been raped. Together with (ex-)partners, sex buyers represent the largest group of perpetrators of sexual/physical violence against persons in prostitution.

Focusing on sex buyers – a change in perspective

TERRE DES FEMMES calls for a change in perspective on the issue of prostitution. The focus should be on reducing demand for commercial sex, not by regulating prostitution. Efforts to improving standards in brothels aim at making prostitution safe, but prostitution cannot be made safe. Prostitutes should neither be criminalized nor made the target or regulation, the law should instead focus on sex buyers and those who profit from prostitution: pimps and brothel owners. Demand drives the market. Huge profits are made on the backs of women.

We demand a change in our policies regarding prostitution. The goal should be to prohibit the purchase of sex and a focus on fighting against the causes of prostitution. The abolitionist legislative model combines the criminalization of sex buying with exit programmes for prostitution. Given that the German government is currently pursuing a different direction, TERRE DES FEMMES is committed to two-pronged approach of also trying to improve the conditions of women in prostitution right here right now. Brothels need to be better controlled to identify victims of human trafficking and improve the situation of prostitutes in the brothels in question. Time will tell if the new Prostitute Protection Act will improve the situation.

Concerning trafficking in women, we demand:

Worldwide people are fleeing their countries of origin because of violence, war, poverty or because of political or religious motivated persecution. In addition to these common factors female refugees face gender-specific reasons for seeking asylum. Among other things, gender-specific reasons can be female genital mutilation, sexual violence, violence in the name of honor or forced marriage. Not only in their countries of origin are women facing the risk to experience gender-specific violence. Also on the refugee route or in camps along the way women and girls are vulnerable to gender-specific violence. Even when they have reached their countries of destination, there is a high risk to become a victim of these forms of violence. Beside this, women refugees also need to overcome women specific obstacles within their integration process.

Refugee women within the German asylum process as well as refugee women who already hold a residence permit are often physically and psychological burdened. This burden stands against a successful integration into Germany society.

In order to successfully integrate in society as a whole, women often need to overcome further gender-specific obstacles. Most of the refugee women come from countries in which a patriarchal understanding of gender roles dominates. This gender-based discrimination leads to social disadvantages. Thus, women for example might have had almost none to any formal education. Hence, refugee women arriving in Germany have restricted access to the labor market. Furthermore refugee women who fled with their children or elderly as well as sick family members are even more reduced in their mobility.

Therefore, most women who have fled to Germany and are seeking protection are often faced with major challenges and should receive particular support adapted to their special needs.

CONNECT is a three year run empowerment project between two women. The project has been started in June 2016 and is financially supported by the “Aktion Mensch”. It pursues the objective to support refugee women who arrived in Berlin, Germany. The project furthermore seeks to accompany the women on their way to successfully integrate into society. The greater goal of the project is to ensure that refugee women are able to live a self-determined and free life in Germany.

On the one hand CONNECT addresses refugee women above the age of 18 now living in Berlin – regardless of their status of residence. On the other hand the project addresses women born in Germany or women who are successfully integrated in Germany and willing to resume a companionship on a voluntary basis for at least one year.

The two women (companions) will have a weekly informal meeting in which the newcomer women are e.g. accompanied when going to public authorities, or are supported by looking for appropriate living space, languages courses, employment and if needed childcare as well as integration into a social network within Berlin. These informal meetings can also be used to do something together outside the German bureaucracy.

The companionships will start in spring 2017. Before this time, the future companions who will accompany the refugee women are going to be trained and sensitized to different and special needs of refugee women. The training includes different topics, which are of importance for the companionship. Among other things these topics include the German asylum law, the different forms of gender-based violence and information on support in cases of gender-based violence, health, childcare and on social network possibilities in Berlin.