YAKA-KOOP, Van, Turkey – Protection against violence in the name of honour 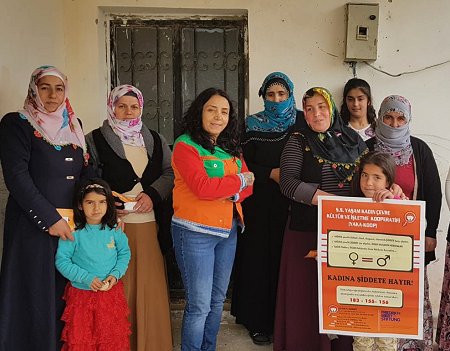 “Early forced marriage of girls is violence!“ Gülmay Gümüshan (fourth to the right), founder and leader of YAKA-KOOP. Photo: © YAKA-KOOP

Target group: Girls and women affected or threatened by early and forced marriage or other forms of violence in the name of honour

YAKA-KOOP (S.S. Yasam Kadin Cevre Kültür ve isletme Kooperatifi, meaning „Empowerment of Women and Women’s Cooperative“) was the first non-governmental women’s organization to be founded in Van in 2002. Thanks to the continuous advocacy work of the 25 founding members, the organization gained the public’s trust. As a recognized expert in the field, YAKA-KOOP is also frequently consulted for gender-specific know-how by authorities such as educational and public health institutions.

Your support is needed for YAKA-KOOP to:

You can also donate to the following account, using the keyword “Turkey” as a reference for your payment: