MIRIAM, Nicaragua – For a life free of violence 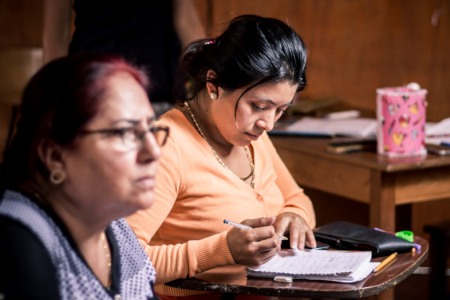 Young woman studying for her graduation at MIRIAM's school. Education paves the way to employment and self-determination. Photo: © Lucero

"Every consultation session begins with a list: what types of violence does the woman experience? Usually this list covers the whole range from psychological, physical and economic to sexual violence. The first step for the woman is to learn to identify violent behaviour. Next, it is about recognizing that 'machismo' and violence aren’t ‘natural’ and shouldn’t be accepted as such.”
Scarleth Díaz, Psychological Counsellor for Asociación Proyecto MIRIAM

Asociación Proyecto MIRIAM fights for the right to a life free of violence and the right to education of girls and women in Nicaragua. The non-governmental organization was founded in 1989 by scholarship holders of a private funding initiative for university studies. Since 1995, the organization has been offering legal support to girls and women affected by violence, in addition to the constant extension of the prevention and empowerment work.

Since the founding of Asociación Proyecto MIRIAM, over 34,000 girls, boys, women and men have been supported:

Despite the currently tense political situation, TDF and Asociación Proyecto MIRIAM have been able to achieve the following results in 2018:

In order for MIRIAM to continue their work in an increasingly challenging political context, your support is highly needed.

Support MIRIAM with a one-time donation or contribute regularly and become a sponsor!

You can also donate to the following account, using the keyword “Nicaragua” as a reference for your payment: