APDF, Mali - Women’s shelters for the protection against violence 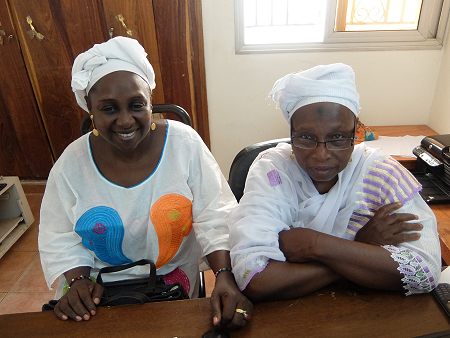 The APDF managers in 2017: Bintou Diawara Coulibaly (on the right) and Aminata Koné Diakité . Photo: © APDF

"For me, the fight for women’s rights is a fight against injustice, arbitrariness and absurdity. By violating the Human Rights from more than half of humanity, meaning girls and women, the world renounces from a holistic and continuous development." – Fatoumata Siré Diakité, founder of APDF

Project area: Bamako, Mopti and other locations all over Mali

In the protection against violence, the Association for the Improvement and Defense of Women’s Rights (APDF, “Association pour le Progrès et la Défense des Droits des Femmes”) is the only non-governmental organization in Mali combining shelter and social, medical, psychological and legal aid services under the same roof. APDF counts 30.000 members and has 8 regional offices all over Mali.

The women’s shelters in Bamako and Mopti take in girls and women affected by discrimination and violence, and offer comprehensive support programs. The women can participate in vocational trainings, like sewing courses or workshops on agricultural production, which open up own income opportunities. If needed, they are provided with the necessary materials and tools to start their own businesses.

With the women’s shelters, APDF pursues the following objectives:

In order for APDF to ensure the sustainability of their project work, the organization needs your financial support.

Support APDF with a one-time donation or contribute regularly and become a sponsor!

You can also donate to the following account, using the keyword “Mali” as a reference for your payment: