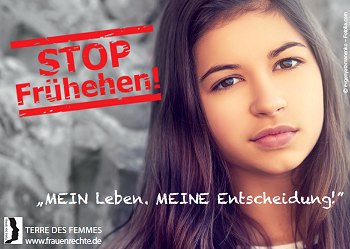 STOP early marriage! 'My life. My choice!'
Photo: © evgenyatamanenko - Fotolia.comSince 2015 TERRE DES FEMMES advocates for the worldwide abolition of early marriages until 2030. An early marriage is a formal marriage or informal union entered into by an individual before reaching the age of 18. In its report 'Marrying too young. End child marriage' from 2012, the United Nations Population Fund (UNFPA) pointed out that one third of all girls in the developing countries (except China) will be married before they turn 18. One out of nine even before they turn 15. According to UNFPA’s estimates 14,2 million girls under 18 will be married every year in the next decade, 39.000 daily.

The consequences are devastating

The death rate for girls giving birth under the age 15 is five times higher than of women in their twenties. In fact, complications during pregnancy and childbirth are the primary cause of death for 15-19 year old girls globally. Moreover underage wives are often victims of domestic abuse and sexual violence. They are forced to leave school and have therefore no access to higher education. As a result, the girls are economically depended on their husbands. This dependency is often passed on to their children.

The causes are diverse

In many poor countries girls are a financial burden to their family. The bride price (paid by a groom or his family to the parents of the woman he has just married or is just about to marry) for virgins is clearly higher than for non-virgins. Moreover traditions and moral values play a significant role. Girls have to stay virgins until marriage to obtain the family’s reputation. In addition, early marriages are linked to girls' access to education. Poorly educated girls are more likely to be married before the age of 18.

TERRE DES FEMMES raises public awareness and engages in lobbying and advocacy promoting the rights and the protection of girls who are affected by early marriage.

TERRE DES FEMMES additionally networks with the project Girls not Brides. Girls Not Brides is a global partnership of more than 550 civil society organisations from over 50 countries that strike for the end of child marriage. About 14 million underage girls are exposed to forced marriage yearly, suffering from the deprivation of their childhood, innocence, security, health and education.

Although early marriages mainly occur in Asia, Africa and Latin America, in Germany minors over 16 are allowed to get married as well as long as the family court approves. On October 11 2015, the International Day of the Girl Child, TERRE DES FEMMES started a petition calling on the German government to take a stand against early marriages