One Year of Let’s CHANGE: “It’s worth the effort to do this patient work.” A conversation with patron Rakieta Poyga 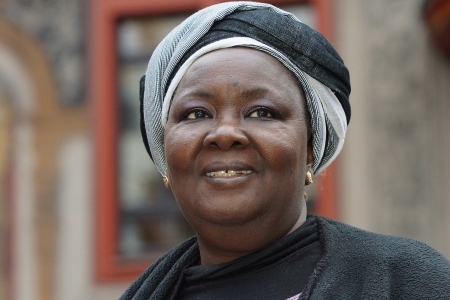 As always, the closing of the ongoing year gives us the opportunity to reflect on past events and goals that were achieved. TERRE DES FEMMES looks back on a very eventful und successful year 2019, in general, and further appreciates the results of the first project year of “Let’s CHANGE”. We took this as an occasion to discuss this year’s achievements and the engagement work against female genital mutilation (FGM) with patron of the project, Rakieta Poyga in Burkina Faso.

Rakieta Poyga is the founder and project coordinator of Association Bangr Nooma (ABN) and works against violence against women for more than 20 years.  From 1984 to 1994, she lived in Germany, respectively in the former German Democratic Republic. Today, she lives and works in the capital of Burkina Faso, Ouagadougou.

A lot has been achieved since the foundation of ABN, mostly because the methods and approaches of how to sensitise communities were specifically designed to match the needs of the target groups. One crucial aspect which had to be considered, was, for instance, the low literacy rate in Burkina Faso. In order to win as many people as possible for their goal, the so called “animateurs” and “animatrices” (French for ‘animator’) – activists who were trained by ABN in order to do sensitisation work – rather work with image material, pictures and films to demonstrate the consequences of a circumcision. “In Germany, showing such pictures would cause harsh rejection, but for our work here [in Burkina Faso] it is necessary”, Rakieta Poyga says. And it’s effective. Through awareness-raising campaigns, ABN has reached more than a million people and thereby protected lots of girls from being cut. More than 900 village committees have been established whose main responsibility it is to actively combat FGM and further ensure the sustainability of the successes that have been achieved so far. In addition, regular radio broadcasting shall help to disseminate the achievements of these campaigns which in turn generates greater public dialogue. Through education in schools, over 40 school committees were established. They are committed to fight violence against girls in schools. „We even start in primary schools. Children are open-minded and curious. They also don’t lie. If they see something, they say something”, Poyga says.

The organisation’s name, Bangr Nooma, means something like „There is nothing more important than knowledge”. And Rakieta Poyga is convinced that this is true. „Without education, there is no foundation” she says. Even more important is that succeeding generations have the opportunity to develop their full potential. Particularly girls require good education. “Without education and financial independence women are constantly oppressed. I always say that the first husband of every woman should be her job. That should have top priority”.

She gives warm thanks to TERRE DES FEMMES for their never-ending support. The cooperation with ABN exists since 1998.
„TERRE DES FEMMES was primarily involved in what we’ve achieved”, says Poyga. „Meanwhile our work mainly focuses on securing our successes. We have already initiated a change of thought in many different places. The numbers are decreasing constantly. Women are organising themselves in order to talk about their problems, including problems related to their circumcision”. Recently, the organisation has been approached repeatedly by potential multipliers from relevant professions: Security personnel, traditional courts and chiefs want to know more about female genital mutilation and the legal situation in Burkina Faso.

A new challenge is the fragile political situation in the country. Rising terrorism resulted in a closing of many schools and many people became internally displaced persons. Many of them feel that their life is threatened. “In those camps, people usually have more urgent issues than FGM or women’s rights”, says Rakieta Poyga.  Reaching out to those people is difficult, even though educational work is now more important than ever. „These conflicts are always executed on the backs of the weak. We have to particularly protect women and children”, she emphasises. “We have to share knowledge”.

Combatting female genital mutilation also includes (young) men as fellow campaigners”, Poyga highlights. In order to raise awareness in villages, ABN always recruits one animateur and one animatrice. “The problems of men and women are not the same”. In addition, in many African societies men still fulfil the role of decision-makers. A young man who clearly rejects the practice would probably receive more support and agreement. Therefore, she thinks that the new project “Men Standing Up for Gender Equality” might be a milestone. She also praises the fact that men are participating in the Let’s CHANGE project and work as CHANGE Agents and CHANGE Trainers to overcome FGM.

Altogether, Rakieta Poyga is very enthusiastic about the Let’s CHANGE project. It is very important that previous engagements are continued by follow-up projects. It cannot be expected that a century-long and deeply rooted tradition could be abolished in just a two-year project term. Continuity and sustainability are crucial. „It’s worth the effort to do this patient work”, she says. “I think there should be more of these kinds of projects”.

Thanks a lot, dear Rakieta, for the exciting dialogue.