„breaking blades“ – Exhibition and Book about Genital Mutilation in Germany

According to TERRE DES FEMMES‘ Dunkelzifferstatistik (Shadow statistics) 2018, there are 64.800 women who have undergone Female Genital Mutilation/Cutting (FGM/C) and are living in Germany. Besides, 15.500 girls are estimated to be at risk.

A Baden-Württemberg-based photographer Antje Pohsegger has now initiated a travelling exhibition in order to inform people about FGM/C in general and effective ways of its prevention. This exhibition is a cooperation between the photo studio Pohsegger, TERRE DES FEMMES and the Menstruation Health Hub in Berlin. By combining photographic artwork with journalistic techniques, this project aims at raising awareness of the practice in Germany and thus contributes towards its prevention and abandonment. The first exhibition is scheduled to be in November 2019 in Berlin’s Umspannwerk, and serves as an opening event for the national touring exhibition.

In order to make the experiences and stories of those directly affected (or not) by FGM/C available to the public, Antje Pohsegger used her professional know-how as an artist and transformed their testimonies into a medial performance. These testimonies primarily consist of women who underwent FGM/C, those that were not cut, as well as male family members. Each of the interviewees individually reports on their experiences with the practice.

The content of the exhibition is subdivided into three parts: First, there is an exclusively informative part in which the various types of female genital mutilation and their health consequences are explained. This part has largely been executed by TERRE DES FEMMES. Second, the exhibition provides an artistic documentary of the subject matter, using billboards that present the most intriguing quotes of the interviewees. Finally, visitors will have the opportunity to listen to podcasts containing extracts of the interviews with community members while walking through the exhibition.

The Berlin opening event shall furthermore be expanded by different side events on issues like “female and girl’s empowerment” or “women’s health”. For instance, the photographer plans to cooperate with the Karne Kunst association, the “crafts & cramps” organisation and Tostan Germany in order to create a festival of bodily integrity und autonomy. Movie screenings, panel discussions, workshops and info evenings complete the exhibition.

The exhibition will run from 1st of November to 30th of November 2019 in the Umspannwerk Kreuzberg, and then move on to other cities. Expositions in Hamburg, Munich, Heidelberg/Mannheim, Darmstadt and Stuttgart are planned. The displayed pieces-of-art and the corresponding interviews target audiences of all cultural backgrounds and ages (16-99 years). Supporting the exhibition, there will be a catalogue containing all interviews. 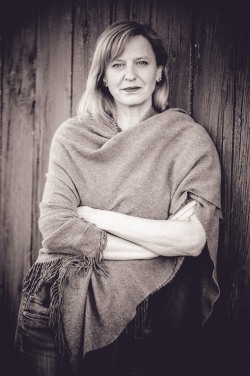 Portrait of the initiator:

As the daughter of a midwife, “women issues” have always been a personal concern for me. The topic of Female Genital Mutilation/Cutting has moved me for more than ten years. Mostly because of the fact that this ritual is practised by people on other people, and this, with the support of their society. We have to do everything possible to end this tradition.