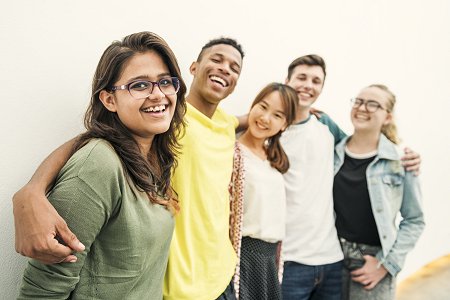 Children and adolescents in Europe are affected by different kinds of violence. Especially girls suffer from gender-based violence. This form of violence can have different manifestations: Psychological pressure, physical or sexual violence and exploitation, female genital mutilation (FGM), forced marriage and trafficking in women. According to a study conducted by the European Union Agency for Fundamental Rights 35 percent of the interviewed women experienced physical, psychological or sexual violence before their 15th birthday and two thirds afterwards.

The majority of EU-states offer trainings focusing on these topics (in 87 percent of the states by governmental institutions, in 83 percent by civil society organisations). However, main target groups are the police or judiciary, not students. Furthermore, these topics are rarely part of the schools’ curriculum.

Main goal of the project is to increase the students’ awareness of the topics of equality, children’s rights, and gender-based violence (especially Female Genital Mutilation (FGM), forced and early marriage) and educate them about their rights. Additionally, a change in the perception of gender stereotypes/gender roles and the social, cultural, and religious norms who reinforce these prejudices should be induced. Finally, children are going to learn to defend their rights and how to protect themselves in violent situations. This includes to learn to contact counselling centres.

For the implementation of these objectives, all partners develop modules that deal with equality, children’s rights as well as all forms of gender-based violence and identify their basis.

The target group in Berlin are approx. 400 students, half of them in primary and secondary schools. The children are introduced to the topics by trained and experienced educators and work together with them.

A protective and empowering setting for students

By offering the students a protective and empowering setting, the project will reach additional target groups through sensitization and information in its course: Parents, as well as families of the participating students, teachers, and social workers as well as employees of the respective districts’ institutions will be trained. Additionally, each group of students will develop one creative output to demonstrate the results of the programme to their parents (e.g. as a stage play or a presentation of collages or pictures). Another objective is the development of a network between (local) authorities, competence centres, and schools for an effective and fast exchange. Also, local institutions (e.g. in the fields of education, welfare, and youth) are encouraged to support and promote learning programmes at schools.

The developed education programme also aims to be transferable to other contexts and projects.

The education programme is implemented in five countries:

Are you interested in us coming to your school?

Then get in touch via: gender-abc@frauenrechte.de