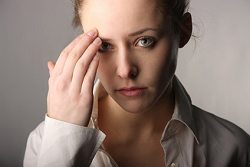 Foto: © Olly- Fotolia.comBetween 20 and 59 per cent of the world's female population are exposed to domestic violence depending on the specific region. TERRE DES FEMMES activities focus on Germany. In Germany, one in four women has experienced physical violence at the hands of her current or former partner at least once during the course of her life.

What is Domestic Violence?

Intimate partner violence is part of many women’s daily lives. According to a representative study commissioned by the federal government in 2004, as many as 25 per cent of women in Germany have experienced some kind of physical and/or sexual abuse by their current or former partner at some point.

The forms of domestic violence

Domestic violence includes forms of physical, sexual, and psychological violence. It may range from threats, intimidation, and humiliation to being slapped, beaten up, raped, or killed. Social isolation and economic violence can also be features domestic violence. Domestic violence simply means to exercise power and control over one's partner. In general domestic violence is not an isolated event, but rather the perpetrator makes use of violence against his/her partner systematically and continuously in order to oppress the partner and keep her/him in an inferior position. People affected by domestic violence often suffer from a lack of self-confidence. It is not unusual for them to accept responsibility for the violence they have experienced.

Domestic violence is not a private matter

Conflicts within a relationship, including violent ones, are often understood as ‘private matters’ by possible witnesses, such as neighbours, colleagues or friends. Thus, they often perceive interference as overly intrusive. Moreover, the control exercised by the violent partner makes it more difficult for the victim to resort to outsiders for help.

In addition, there are very real difficulties and obstacles for a woman to break free of a violent relationship, such as financial dependence on the perpetrator. Also, ending an abusive relationship does not always put an end to the threat of violence. On the contrary, the risk of falling victim to violence by an abusive partner increases especially after a break-up.

Violence against women within a partnership has been a central and much discussed issue throughout the history of the German women's movement. Thanks to the commitment of the first generation of women’s rights activists women’s centres, emergency helplines, and women's shelters were established from the mid-1980s onwards.

Naturally, TERRE DES FEMMES has also regarded the subject of domestic violence as an important and relevant matter in its work for women’s rights. However, it took a few years for the organisation to establish a separate department against domestic violence.

Since 2006, a separate department has been established in order to combat the different forms of domestic violence that continue to shape the everyday lives of many women in Germany. While striving to raise public awareness via educational campaigning and advocacy on current legal frameworks, TERRE DES FEMMES also supports the introduction of a Workplace Policy on domestic violence in German companies.