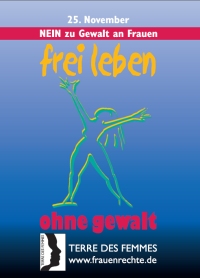 On 25 November 2001, the International Day for the Elimination of Violence against women, TERRE DES FEMMES initiated a nationwide campaign fighting violence against women. Ever since banners with the slogan “Live freely – without violence!“ are run up all over Germany every year.

This Remembrance Day dates back to the murder of the three Mirabal sisters who were killed by military intelligence in the Dominican Republic on 25 November 1960 after having undergone months of torture. The sisters had been active in the underground movement and other activities against the tyrannic dictator Trujillo. Today, the courage of the Mirabal sisters and their struggle against Trujillo is regarded as an international symbol and an inspiration for women to empower themselves and stand up against any kind of injustice. 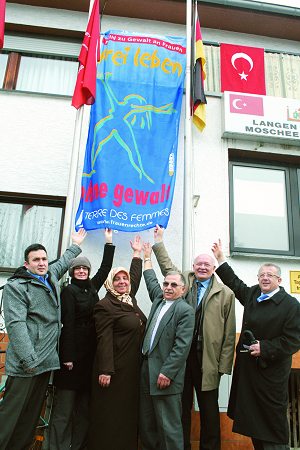 TERRE DES FEMMES hoisted up its flags as a symbol against violence against women for the first time in 2001. Since then numerous women's representatives, associations, ministries, and activists have taken up and continued the campaign. In 2011, as many as 6,300 TERRE DES FEMMES flags and banners were hissed around the world! We are proud to see that our campaign has clearly expanded and made an impact beyond German borders. Today, the TERRE DES FEMMES flag flies from Romania across Honduras all the way to Kenya in order to raise solidarity and awareness about violence against women. Among the longstanding participants of the campaign are, for instance, the women of TERRE DES FEMMES’ partner project against Female Genital Mutilation (FGM) in Burkina Faso.

Together with our supporters, we announce the message “NO to violence against women!” on flags and banners in a growing variety of languages: English, Arabic, French, Spanish, Turkish, Russian, Polish, and Ladin. This message is celebrated in a large number of German cities and communities also in the form of film screenings, lectures, and other events. Many bakeries, too, support our cause with an annual nation-wide campaign in which bags are labelled with a catchy slogan against violence against women. Several of our campaigners have won the support of high-profile personalities whose support and participation in the hoisting up of the flag in front of local townhalls or other public buildings help us to catch the attention of the media. We have thus managed to create and maintain important alliances and networks throughout the recent years that we hope to strengthen in the future.

You, too, can support our campaign! If you would like to order a flag, banner, or simply receive further information on TERRE DES FEMMES’ flag campaign please get in touch with us: fahnenaktion@frauenrechte.de. 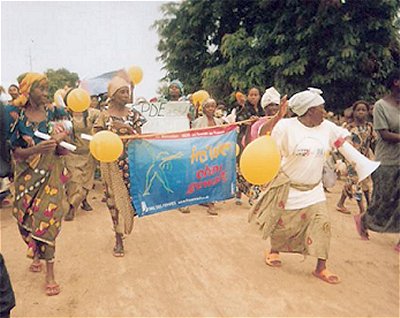